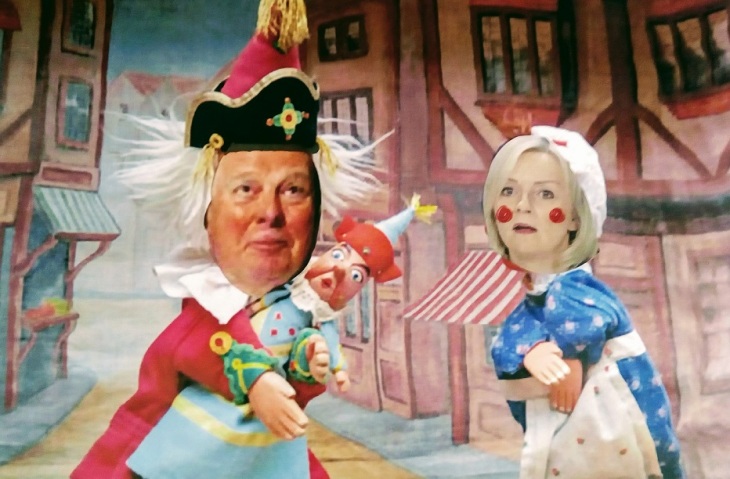 Well, we didn’t see that one coming, did we, boys and girls?

I’ve had my head buried in a serious trial over the last couple of weeks. It’s the type of case which has been attracting the unwelcome attentions of various ill-informed quarters of the media and Parliamentarians ignorant of criminal law and procedure. The real world has, to a certain extent, receded into the background. It’s the sort of trial where I have had to listen to the Helmet back catalogue. A lot.

So I nearly missed the bit where the MOJ turned into the Punch and Judy Show.

We all know that Liz Truss is the worst Lord Chancellor since Geoffrey The Bastard (who held the office from 1181 to 1189). Her obvious, embarrassing lack of grasp of the issues, not to mention the conspicuous lack of regard for access to justice and the importance of proper procedure which permeates down through her entire department, have found her in hot water on numerous occasions since she was plummeted into the role.

Truss is, inevitably, one of those people who will swallow wholesale the bandwagoneering of the likes of Vera Baird, Harriet Harman and their ilk (see link here to my guest blog at Legal Cerebral on their pet projects). Mainly because it suits her department’s agenda, which is daily further revealed to be to deprive the general public of the wherewithal to have access to justice.

She was at this again only a few weeks back, in front of the Lords Constitution Committee (link to the full car crash footage from 1.3.17 is here). She conducted the discourse with all the gravitas of Zippy performing one of the musical interludes on Rainbow. 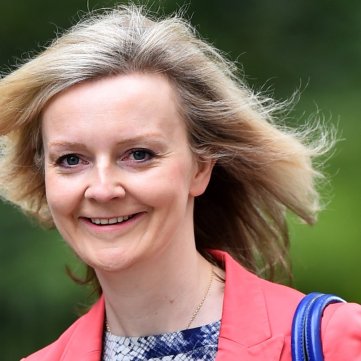 (From left: Zippy from Rainbow, Liz Truss. I think…)

Truss was being asked about her constitutional role and in particular, the importance of supporting the independence of the judiciary – a topic of which she appeared to have a minimal grasp (surely she has aides who are supposed to send her out properly briefed about this stuff?). She also found time to slip in a sly rhetorical question about “how do we do legal support but in a different way?”.

All was explained in the Law Gazette on 6.3.17 (see link here), as another cunning plan was revealed by the MOJ to ensure that lawyers will play little or no part in any type of proceedings any longer. There is a Green Paper planned which, according to MOJ patsy Sir Oliver Heald, will see “legal support” provided in “a reform programme” (always ominous) which “will deliver a justice system that is more accessible to the public”. Which means, it won’t be. Truss was trilling to Peers about how the Prisons and Courts Bill will “change the justice system”, boasting about how “fewer lawyers will be needed” due to the new system of virtual and online hearings.

Legal support. Didn’t we used to have a thing called legal aid which, well, did that sort of thing?

But stop it, I’m telling you the plot!

On several occasions during the Parliament TV show, I actually had to pause the footage, either to hold my aching sides, or bang my head on the desk repeatedly. Because behold, Truss actually proclaims that “I see my role as the overall custodian” of the justice system, with a responsibility “to ensure that the system is sufficiently funded”! Cough.

Thereafter, she vomits up a stream of soundbites and platitudes, ranging from “ambitious reform programme!” to “value our judiciary!” to “online triage!” and that old favourite, “new system for legal support!”. Apparently, she’s “always spoken out about the independence of the judiciary” (seriously?), but apparently not to the extent that she’s prepared to fulfil the responsibilities of her oath and defend them to the press, just in case the Fail writes something nasty about her or something.

Oh, and for that “doing legal support in a different way”, apparently she’s been in discussion with the legal profession about the reforms. Who knew? I’ve yet to meet any practitioner who’s been consulted rather than actually have the ‘reforms’ foisted on them.

However, even after this abject showing, no one could have seen the moment coming, a couple of weeks later, when the Lord Chief Justice, Lord Justice Thomas, produced his metaphorical Mr Punch club in front of the same Constitution Committee and began to set about the metaphorical head of Truss with it. Did someone say “sausages”?

In an astonishing piece of TV, Thomas told the Committee on 22.3.17 that our own unesteemed Lord Chancellor was “completely and utterly wrong” when she declined to exercise her constitutional duty to defend the judiciary over the Brexit case (see the original piece in Politics Home here). And he battered her further about the chops when pointing out to her that she and her inept department had got the whole pre-recorded cross-examination fanfare announcement arse about face!

Now, it’s not often that the country’s most senior judge has to administer such a thoroughly pants-down spanking to the nominal head of his profession. The media reports were tame compared to the actual mauling administered (see Parliament TV link here). It has to be seen to be believed.

Thomas is on the offensive from the start, as he begins by setting out a long list of all the topics causing him concern, ranging from the impact Brexit will have on the legal landscape to the “major reforms” to the civil, family and tribunals jurisdiction (which as we all know sound like a Titanic waiting to hit the iceberg). Then there’s the steady rise in the workload of the Court of Appeal regarding asylum and immigration cases, issues regarding access to justice (well, that’s sorted, as the MOJ will simply ignore that one), problems with judicial recruitment, morale and working conditions, and the “issues relating to our relationship with the media, Parliament and the executive”. Phew – pass the popcorn!

Thomas had clearly polished his steel-toecapped boots that morning. Pursing his lips, he’s in with both feet. “I’m afraid we had to correct a serious misapprehension,” he spits, about the MOJ’s much lauded announcement about the imminent national roll-out of pre-recorded cross-examination for all complainants, adult and child, in sexual cases. “I’m afraid they’ve misunderstood the thing completely.” This is said with an expression of complete incredulity. How could the MOJ be, well, so thick?

He goes on to reveal some key information. Judges, he says, had been fighting to get pre-recorded cross-examination introduced since 1999 but were told there was “no money” for this by the MOJ. This is interesting, since those of us at the coalface have long been saying that the plans to introduce this as the de facto position in all child sex cases, let alone adult ones as well, would vastly increase costs within the system, but none of the Powers That Be had ever wanted to confirm this before. From where is this funding going to come, with the MOJ telling us they’re so strapped for cash that they’re trying to cut criminal legal aid fees yet again?

“We’ve made the pilot scheme work,” continues the LCJ (but note, this was only operating in three Crown Court centres nationally, and only applied to children and then in cases involving sexual allegations), “and we wanted to roll it out carefully.” You can see him taking a deep breath. “BUT THERE HAS BEEN A COMPLETE FAILURE TO UNDERSTAND THE PRACTICALITIES.”

That is an understatement on any level. Pre-recording cross-examination in all sex cases involving child and adult complainants would involve around 40% of the criminal courts’ current case load. It is questionable as to whether the magistrates’ or youth courts would be able to cope with any such cases, in a climate where there appears to be a desperate race to prevent by any means either way or youth cases being transferred to the Crown Court: this would encompass a large number of sexual allegations.

And that is without the consideration of the involvement of counsel in this. Under the pilot scheme, many pre-recorded cross-examinations took place MONTHS before the actual rest of the trial. You see, the pre-recording actually counts as day 1 of the trial. So someone, somewhere needs to ensure that the same counsel are still available to resume the trial all those months later. Which, when you have to factor in court list officers and their obsession with statistics, isn’t as straightforward as it sounds.

It seems the Lord Chief’s dander is well and truly up. “It’s very troubling, it isn’t something we should have to do,” he says about the fact that he had to write to all judges in the country to correct the MOJ’s cock-up and then go to the media with it to boot. It appears, he says, that the problem likely stems from the fact that the MOJ had a policy, which started a few years back, of getting rid of any staff who actually knew how the court system worked: “They do NOT have enough people who understand,” he bristles. (My view is that they have people who understand, but not enough who actually give a flying one, but that’s just me.)

It appears that the MOJ had been systematically getting rid of anyone with relevant experience, including putting a ton of HMCTS staff on short term contracts – which has resulted in all the more work falling on judges and no one behind the scenes knowing what the feck is going on. He should try being one of the barristers or solicitors trying to make sense of the Alice in Wonderland system which the MOJ have created, without the security of tenure and still generous pension and holiday packages enjoyed by the judges, then!

“People don’t understand the resources needed to run a court system, until it falls over,” the LCJ continues. I reckon the Treasury understands only too well, except it doesn’t want to properly fund a court system, because it’s inconvenient. It might (gasp) mean that the plebs out here might actually be able to get access to justice if they did that, and we can’t have that at all. Not when we might have to fund warships to Gibraltar or something.

(Pic by the luvverly Cartoonstock)

But it’s when Thomas turns his attention to the recent press coverage about judges and the Article 50 case that you can really see his nose twitching. His face is positively puce as he bellows that Government Ministers (and presumably, the Lord Chancellor in particular) “must uphold the independence of the judiciary”. And is he almost apoplectic when he splutters about THAT Truss appearance and her subsequent interview with the FT (sadly paywalled, so I can’t link to it, but yes, it was a bad as he says)? “SHE WAS COMPLETELY AND UTTERLY WRONG! IT IS THE LORD CHANCELLOR’S DUTY!” He went so far as to describe a “casual disregard for the rule of law” which seems to pervade Government. What, the one those of us at the coalface have been banging on about for the last decade, you mean?

“I regret to have to criticise her as severely as I have,” he growls, “but she has taken a position that is CONSTITUTIONALLY ABSOLUTELY WRONG. There is NO POINT MINCING WORDS!”

None at all, mate. You go right ahead!

It’s just a shame he didn’t see fit to give the MOJ a few of these home truths before he was about to retire. They might have listened to him then. They certainly don’t listen to us.